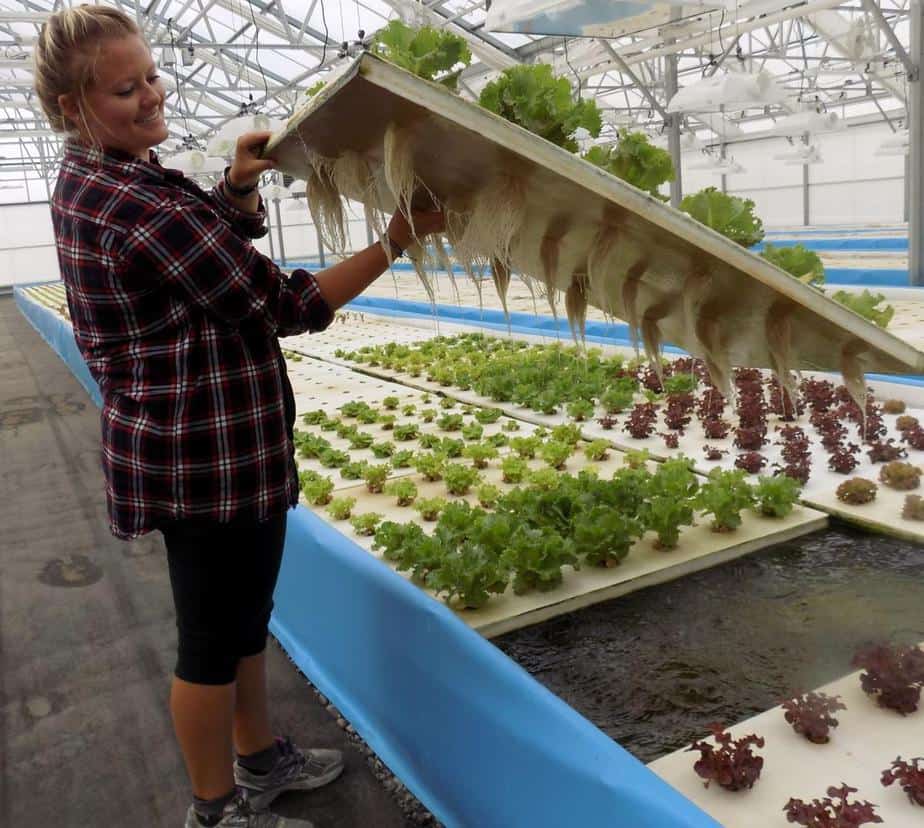 Whether you’ve already set up your greenhouse or are still in the planning stages, you may be considering the best method to sustainably grow your crops. Greenhouse aquaponics can be a great way to accomplish that goal.

Aquaponics can be a suitable growing system for gardeners of all experience levels, though there is definitely a learning curve. Many aquaponics systems are also ideal for gardeners with limited space or resources.

How is Aquaponics Different from Hydroponics?

When deciding what type of greenhouse you’d prefer, it’s important not to confuse aquaponics with hydroponics. Though the two systems use water rather than soil, there is a crucial difference.

With hydroponics, the crops are grown in a nutrient-rich liquid solution. Aquaponics, on the other hand, combines that process with aquaculture, which involves raising aquatic animals in water tanks.

Whether the tanks contain fish, prawns, crayfish, or even snails, the result is nutrient-rich water, which is then used by the crops to grow and flourish.

Though you may be hearing more about aquaponics, it’s not a new system. Aquaponics has been used by ancient cultures around the world, including the Aztecs and the Tang Dynasty in China.

In more recent times, aquaponics has been used on a commercial level to maximize production in a more sustainable manner.

How Does Aquaponics Work?

In aquaponics, the crops are planted in a grow bed, while the aquatic animals are placed in a water tank. The water in the tank, which contains nutrient-rich fish waste, is then fed to the grow bed.

Naturally occurring beneficial bacteria then break the ammonia in the fish waste own into nitrites and nitrates, which are then absorbed by the plants. This process cleans and filters the water.

Once the water has gone through the grow bed, it’s typically recirculated back into the tank to restart the cycle from the beginning.

It must be mentioned that the bacteria play a crucial role in this cycle. Without the bacteria, the ammonia buildup would eventually reach toxic levels and can cause serious health problems for the aquatic animals.

Benefits of an Greenhouse Aquaponics

Greenhouse aquaponics wouldn’t be as popular as it is if there weren’t more than a few benefits. One of the most significant benefits is water usage. Since the water is recirculated through the system and is rarely changed or thrown out, greenhouse aquaponics typically uses around 90% less water than conventional growing methods.

Additionally, the lack of soil and controlled environment means that you won’t need to spend as much time weeding. Pests are also much easier to manage thanks to the control you have over your plants’ environment.

If you’re worried about the size of your greenhouse, you’ll be pleased to know that aquaponics does not require much space. Your system can be built to accommodate the space you have or the one you’re planning to build.

Finally, greenhouse aquaponics is not an expensive growing system and can be accessible for gardeners of nearly any income level. If you’re on a tight budget, you may require a simpler setup than someone with more disposable income, but it’s not an impossible dream.

Plus, once you get growing, you’ll be able to save money (or even make money) growing fresh produce right in your own backyard. Depending on the fish you use in your aquaponics systems, they may also be able to provide you with an additional food source.

Disadvantages of an Greenhouse Aquaponics

As with any growing system, there are a few drawbacks to aquaponics. One of the most notable drawbacks is the type of crops you’re able to grow. Since the plants will be grown in water, rather than in soil, it’s important to choose water-heavy crops.

Carp, bass, and catfish are other options to consider as well. The type of fish you choose will depend on whether you intend to use the fish as a source of food. If you don’t intend to eat the fish, your selection widens, but it’s still important to consider whether your species of choice will thrive in an aquaponics system.

What Do I Need to Get Started in Aquaponics?

As previously stated, getting started in aquaponics isn’t difficult or extravagantly expensive. You can expect to spend more at the beginning of your aquaponics journey, but once your system is established, your costs should be minimal.

The specific aquaponics system that works best for you will depend on your goals and the space you have available. Aquaponics systems can easily be purchased commercially, or you can DIY your own system.

Available size options start with just a single barrel to one or two grow beds if space is an issue. Larger systems are also available if you have the room or intend to grow on a commercial level.

Since the fish play a vital role in any aquaponics system, it’s important to choose wisely. If you want an edible species, tilapia will likely be your best bet, though shellfish such as prawns or crayfish are also options.

If you believe that fish are friends, not food, you may want to consider decorative species such as goldfish or gourami. It’s also important to consider your climate and fishkeeping skills when choosing as some species are hardier than others.

As previously mentioned, your choices of plants are somewhat limited. Leafy greens are a popular choice, as are cucumbers, tomatoes, peppers, strawberries, and some herbs. Obviously, you’ll want to choose a crop, or variety of crops, that you’ll be able to use or sell regularly.

Do you need some assisstance growing your seeds from scratch? Click the link – we’ve got a full guide about that!

However, some plants contain toxic compounds that can kill your fish. Some of these compounds, such as those in tomato plants, won’t harm the fish as long as they don’t consume any parts of the plant. Be sure to check if your crops are safe for fish before planting.

The 3 Best Aluminum Greenhouses in 2021

Greenhouse Kits vs DIY Greenhouse – Which is Better?